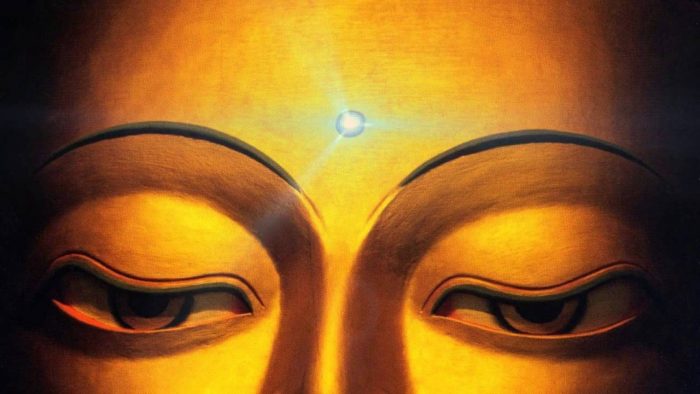 Between the two eye-brows and at the top of the nose, there is a small hole which is one tenth of the hole of a needle. This hole is called the Forehead Eye. There is a small tissue covering this hole.

Between the genital organ and the anus there is the region known as Moolatharam or the Basic Place wherefrom secretes semen. This semen is also known as Kundalini Sakthi. This Sakthi is raised up through the small hole in the backbone to the nape. From there it is still further raised up to the crest in the head. The skull is made of small bits of flat bones which are dovetailed with one another. When this Sakthi is taken to the top of the brain by the awaring touch of the Guru combined with subtle intelligence, the Forehead Eye will be opened.

It is possible to open the forehead eye, only if there are three prerequisites, viz, (i) the guru of Wisdom who knows this technique, (ii) the disciple past twenty years of age, havinig wisdom and semen and (iii) the concentration of the disciple according to the instruction of the Guru. If this eye is opened, the intellect can clearly understand the pleasure sensation. This eye cannot be opened by any kind of pranayama, basic of yogic exercises. After the forehead eye is opened, the clockwise movements going on in the eye at the nape and in the top eye at the crest, the expansion of knowledge of six centres (Shadadhara) and the lunar circle will be known clearly.

There is none who does not worship the forehead eye. Without knowing that they are so worshipping, they really worship it, when they say ‘I salaam you’, ‘I wish you good morning’, ‘I offer my namaskarams to you’, ‘I bow down to you’ or when they, according to their religious practices, put caste marks on their foreheads. Such marks may be coloured dots or smearing of ash, or the wearing of namam by Vaishnavites. All respect this place by such show of their hands, actions and alms. It is from this seat of authority; and irresistable courage and anger also emanate from this same place. If you get extremely angry, it can be controlled easily by loofing at the tip of your nose.

If the body temperature of a man falls, and if he concentrates his thought on the forehead eye, he can create warmth in his body. The sayings that are born out of this place will happen accordingly in a short time. We can easily convert a great scoundrel or criminal into a good man by proper concentration of the thought on the forehead eye. We can do it so at once or in a short time, but it is certain. So this place or spot is known as the Seat of Authority. So make the best use of this place for concentration of good thoughts as it serves both for the destruction of pride and for its growth.

Man should try to be in devotion at his early life, and to be in yogic practice at his young adult life, and to be an atheist with enlightened knowledge. If a fool says it is impossible, a strong and wise man will say it is possible. The opening of the third eye is compared to something that cannot be cut or joined by welding techniques of modern times.

Understanding the God or becoming the God can be attained by man through the awareness of the forehead eye.